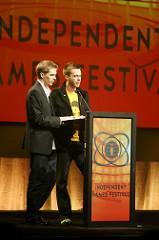 Crayon Physics Deluxe, Kloonigames' 2D physics puzzle game that allows players to experience what it would be like to transform drawings into physical objects, was named the winner of the $20,000 Seumas McNally Grand Prize at the 10th Annual Independent Games Festival (IGF) Awards, presented at a ceremony this evening at CMP's 2008 Game Developers Conference (GDC).

Other major winners at the IGF ceremony included physics-based puzzle action game, 2D Boy's World of Goo, which won the awards for both Design Innovation and Technical Excellence, and Audiosurf by Invisible Handlebar which won the $2,500 Audience Award, after receiving the largest share of more than 3,500 votes cast online over the past two months at IGF.com.

The IGF awards have been described as the Sundance Festival of the videogame industry, and offer both global exposure and over $50,000 in cash prizes to the developers of the winning games.

Other award recipients included One Ton Ghost's comical treasure-seeking adventure Iron Dukes, which took the award for Best Web Browser Game, Kokoromi's Fez, which won for Excellence in Visual Art for its presentation of a 2D character exploring a 3D world, Invisible Handlebar's Audiosurf, a game that lets players experience their songs in real time, in full color, and in 3D, and which took the prize for Excellence in Audio, and, winner for Best Student Game, Synaesthete, a music-driven arcade-style shooter developed by students at the DigiPen Institute of Technology.

Another notable award given at the IGF ceremony was The Gleemax Award for Strategic Gameplay ("The Gleemie"), presented by IGF Platinum Sponsor, Gleemax, Wizards of the Coast, Inc.'s community for gamers. Three games were awarded "The Gleemie" prize package, which consisted of a custom designed trophy accompanied by a tiered prize package. (1st - $5,000, 2nd - $3,000, 3rd - $2,000).

"As the video game industry grows bigger by the day, it becomes even more important to give a voice to the independent developer," said Simon Carless, chairman, IGF. "This year's Independent Games Festival winners are showcasing how important independent games are -- both as an artistic movement and as accessible titles that are really damn fun to play."

The IGF awarded the following games in each category in the main competition -- each received a cash prize of $2,500 as well as sponsor-related prizes, and the Grand Prize winner was awarded $20,000.